It's a demonic creature with the ability to fly, extreme strength and durability, and some intelligence (including the ability to maintain and drive a car, wear a human disguise, carve weapons out of bone, and create grotesque "tapestry" out of human corpses). It uses these abilities for 23 days every 23 years in order to replace all of its body parts aside from the wings and a kind of web-like component that overlaps the creature (and particularly its head).

No explanation of the creature's origins is given, other than that it has apparently been awakening to feed for centuries (there are hundreds of corpses in the creature's lair, and in Jeepers Creepers 2, we find out that some of them are more than 200 years old). The directors have hinted that it might have originally been human at one point, a very long time ago, but it is not now.

The Creeper is a fictional character and the main antagonist in the 2001 horror film Jeepers Creepers and its 2003 sequel Jeepers Creepers II. He is an ancient demon who feeds on human beings for 23 days every 23rd spring.

"- It eats lungs so it can breath, it eats eyes so it can see. Whatever it eats...becomes a part of it."

"- I don't know if its a demon or a devil...or just some hungry thing from some dark place in time..."

It is a demon that eats body parts of his victims every 23 years, that seems nearly invincible. At first It was thought to be some kind of demon worshiper when Darry Jenner found Its self portraits. It has whispy white hair. It seems incapable of speech, but in the first film it was heard whistling the tune of "Jeepers Creepers".

The Creeper has the ability to regenerate any part of his body by devouring a similar part from a victim. In this manner, he has survived since Biblical times, replenishing his deteriorated body by ingesting human flesh and organs. The ability also works as a form of healing factor, as the Creeper can discard injured or maimed body parts after ingesting a replacement version, as shown in Jeepers Creepers II.
InvulnerabilityEdit

"- I think Its eaten too many hearts for Its own to ever stop..."

In addition to his regenerative powers, the Creeper is quite resilient. In the first film It was run over several times and was still alive, It then sprouted a bat-like wing. In the second film it is impaled with harpoons multiple times yet retains the ability to move, including several head wounds. The Creeper only stops moving when it reaches its hibernation period.

The Creeper employs a variety of weapons in his pursuit for food. He commonly carries daggers and shurikens made from the flesh and bones of his victims (and, possibly, himself). He also uses a medieval battle axe in the first film, which may indicate that it has once lived some where else. The weapons he creates are shown to move of their own accord (or, perhaps, return to their master) in the second film, where a knife flies across a room under its own power, traveling through a leather lamp before embedding into a nearby wall. Later in the film, the same knife has been converted into a harpoon-like weapon to be used against the Creeper by allowing it to guide itself to its target.

The Creeper also drives a very large, old-fashioned, rusted truck equipped with a cow catcher on the front, which he uses to transport bodies (dead or alive) to a cave underneath an old church through a sewer pipe where he sews his victims to the ceiling that it calls it's house of pain. He also uses his truck to scare potential victims. The license plate on his truck reads "BEATNGU", "Be Eating You"--commonly confused as "Beating You"--. The truck can attain unusually high speeds (at least 100MPH) despite its decrepit exterior.

One of his earlest known attacks was on couple Kenny Brandon & Darla Kleeway; He ripped Darla's head off--and later sewn it back on--and smashed up their car. The odd killing became sort of a legend in the area.
"The difference between a democracy and a dictatorship is that in a democracy you vote first and take orders later; in a dictatorship you don`t have to waste your time voting. "

Da je The Creeper vanzemaljac dobio sam ideju zbog scene sa glavom u drugom dijelu...
"The difference between a democracy and a dictatorship is that in a democracy you vote first and take orders later; in a dictatorship you don`t have to waste your time voting. " 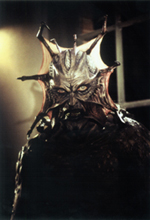 Inače i dalje mi više baca na vanzemaljca koji izgleda kao demon, a to što se vraća svake 23 godine izgleda kao prokletstvo (ako je demon onda je sigurno indijansko...a tu je i sama Crkva), no meni više izgleda kao neka vrsta hibernacije....
"The difference between a democracy and a dictatorship is that in a democracy you vote first and take orders later; in a dictatorship you don`t have to waste your time voting. "

Return to “Ostalo u horror štihu”